Why are Burgers The Best Bar Food?

There are plenty of choices regarding the food you get at your favorite watering hole. At Ed’s Tavern, we did some thorough research and found some interesting information. As it turns out, the most popular bar food isn’t pizza or peanuts, but burgers. That’s right, burgers. To celebrate this newfound information, we present facts about this delicious meat sandwich that people just can’t get enough of. 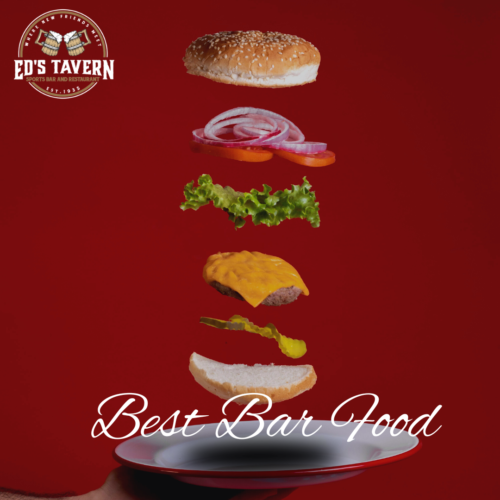 The individual who invented the hamburger and its precise debut are two facts that have tragically been lost to the annals of forgotten history. Some of the earliest mentions of the meal date back to the marauding hordes of Ghengis Khan. While on a campaign, his soldiers would feast on raw patties of lamb and mutton. When his grandson, Khubilai Khan, invaded Muscoy, now known as Russia, the dish was appropriated into Russian culture. Served raw, it was known as “steak tartare.” Eventually, its popularity spread across the European continent.

Like many other delicacies, the hamburger eventually traveled across the Atlantic Ocean to America. It’s believed that the dish was brought over by German immigrants in the 18th and 19th centuries. This dish, known as the Hamburg-style steak, was simply shredded beef with regional ingredients for flavor. It’s believed that when the tide of immigration increased in the 19th century, immigrants were served slabs of meat which were then cooked and placed between two slices of bread. While the exact origin is unknown, Wisconsin claims to be the “home of the hamburger” and insists it originated at the state fair.

Whatever the exact origin, there’s no doubt that the hamburger has achieved immense popularity in the United States and continues to be the favorite of many.

Some Choice Offerings at Ed’s Tavern

The tradition of the hamburger is alive and well at Ed’s Tavern, and we believe in celebrating it to the fullest. For traditionalists, we have the classic, for those who want a bit of bite, we offer the Big Cowboy and Steakhouse, and for those abstaining from meat, we also have the Beyond Burger, served up to your exact specifications. There’s no limit to what we can’t do between two buns. For a menu, directions, and more tasty tidbits of info like the one you’ve just read, head over to edslakewoodranch.com.