Watch the Lightning Advance Closer to the Stanley Cup!

It’s officially that time of year, post-season hockey is here! The NHL playoffs are in full swing, and the Tampa Bay Lightning are dominating the ice. The team has made it to the third round of the playoffs are currently battling the Washington Capitals for the Eastern Conference championship, and Ed’s Tavern is the place to be to cheer on our Bolts. 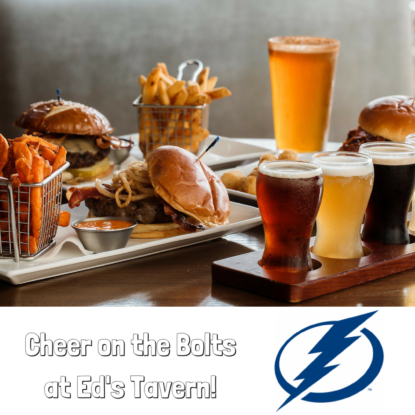 In the first round of the playoffs, the Lightning defeated the New Jersey Devils four games to one. In the second round, the Lightning took on the Boston Bruins, winning the series 4-1 as well. This dominant run has been thrilling to watch, and the conference finals are sure to be as well. If you want to catch the action, Ed’s Tavern is an outstanding place to watch the Stanley Cup playoffs unfold.

Cheer on the Tampa Bay Lightning alongside other fans at Ed’s Tavern. We are broadcasting all of the Lightning’s games, so you won’t miss a second of the action. In addition to a great spot to watch the games, we also offer delicious food to NHL fans. Stop by Ed’s Tavern, cheer on your favorite team, and dine on some appetizers, salads, sandwiches, wings, burgers, and so on.

We also have an excellent dessert menu, beer menu, and wine menu to choose from. Complete your sport-watching experience with a bottle or can of our on tap or draft beers. You can find Ed’s Tavern at 10719 Rodeo Drive in Lakewood Ranch. We are open every Monday through Thursday from 11 a.m. to midnight, as well as Fridays and Saturdays from 11 a.m. to 2 a.m., and Sundays from 11 a.m. to 11 p.m. We hope to see you at Ed’s Tavern cheering on the Tampa Bay Lightning alongside us! Join us tomorrow, May 15th, at 8pm for Game 3!