The History of Texas Hold’em!

If it’s Tuesday at Ed’s Tavern in Lakewood Ranch, then it’s Texas Hold’em night starting at 8:00 PM. Texas Hold’em is probably the most popular variety of poker played in the United States. That’s not always been the case, with other forms of poker such as stud or draw most common until Hold’em rose to popularity starting in the 1960s. 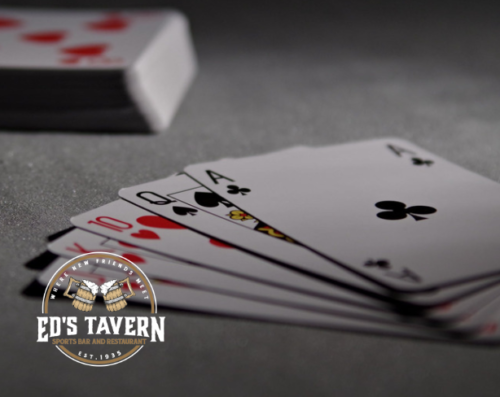 Where Texas Hold’em began is lost in history, but most poker historians and the State of Texas agree the original home is Robstown Texas and has been recognized as such by the Texas State Legislature. It was most likely a Texas regional game held in private poker rooms. Poker in times past was a dangerous pastime with players of questionable ethics, players being robbed of their winnings, and other unscrupulous acts. As a result, gamblers would travel and play in groups for mutual protection. A group which included Doyle Brunson took Texas Hold’em to Las Vegas in the 1960s and by 1967 it was being played regularly there. For some time the only venue offering Texas Hold’em was the Golden Nugget casino, and many professional gamblers didn’t want to play there as it was considered a less than ideal location. Finally, a group took the game to the Dunes, located where the Bellagio is today, and the game became popular.

Texas Hold’em popularity exploded with introductions into California’s legal card rooms, expansion into Europe, and eventually its inclusion in the World Series of Poker tournaments. By the 2000s, the annual tournament saw thousands of entrants vying for a first prize totaling millions of dollars. The highest entrant count so far was 8,773 players in 2006. Further interest was created by the first online game in 1998.