You would be hard-pressed to find any one individual who hasn’t tried nachos at least once in their life, and it would be an even more arduous task to find someone who doesn’t enjoy the dish. Nachos are always fun to chow down on and even easier to prepare. On October 21st, we celebrate the existence of the nacho and its impeccable taste and acknowledge how fundamental the snack has become. Come along with us as we turn back the pages of history to examine the origins of this crunchy and tasty treat. 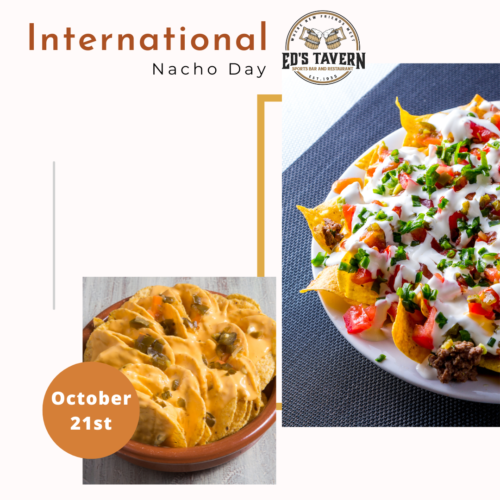 While some Mexican dishes have origins that stretch back centuries, the nacho hasn’t quite reached its centennial anniversary yet. According to research, nachos first began to appear as early as 1943 in the Mexican township of Piedras Negras. Because of its close proximity to the US border, most notably Fort Duncan, it was an accident that would help propel the nachos to its first step to becoming the iconic dish it is now.

During a shopping trip, a group of wives decided to stop for dinner. And while the vast majority of restaurants had closed for the evening, Ignacio Anaya, a chef at the Victory Club, told them he would accommodate them with what he had leftover in his kitchen. The dish he served the hungry patrons that night consisted of fired tortilla chips, shredded cheddar, and jalapenos. Ignacio named his creation after himself, and henceforth the dish would be known as “Nachos Especiale” Anaya would pass away in 1975, but the family continued the tradition of the nachos. And while the ownership of the dish would eventually wind up in the public domain, the food’s reputation and legacy were forever etched in stone. It’s almost poetic that one of the most popular Mexican food staples of all time was merely a coincidence spurred on by necessity. And as Edison himself once noted, necessity is the mother of all invention.

As you celebrate the nacho on October 21st, think of this colorful anecdote from history between bites.

For award-winning nachos that satisfy, you don’t need to go to either Texas or Mexico. You only need to go as far as Lakewood Ranch to partake in the dish at Ed’s Tavern. With a menu that covers all the bases, deals, and specials constantly being offered and special discounts for military and first responders, we’re grateful to serve the community we all call home. For a menu and more, pay us a visit at edslakewoodranch.com.