While its exact origins have been lost to the annals of history, it’s believed that it was in 1430 when vodka came into existence. Legend has it that a monk named Isidore, who lived in the Chudov monastery behind the walls of the Kremlin, discovered one could make an alcoholic beverage by distilling potatoes. If we assume for a moment that this is, in fact, the true beginnings go the beverage in question, then we should look forward to commemorating his discovery on October 4th, as it’s National Vodka Day. 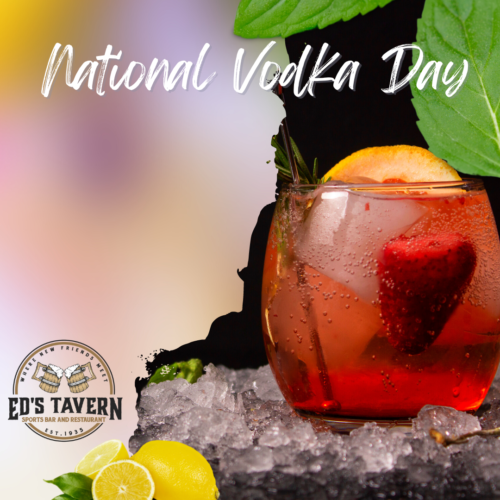 National Vodka Day recognizes the glorious fruits of Isidore’s discovery. Vodka is used in a variety of cocktails and is one of the most popular spirits to be found in the United States. While potatoes were used in the first vodka recipes, distillers rely on a wide variety of ingredients, such as various strains of grains and fruits, meaning they can make vodkas that come in a variety of flavors. While there are several different brands of vodka to be found, it’s a rule that all vodka sold in the United States must have an alcohol content of 30% or higher.

Variety, Thy Name is Vodka

One of the most interesting things about vodka is the number of cocktails that it can be used for. While everyone has their favorite, we’ve taken the time to list a few that we find enjoyable.

On the Rocks – Vodka, and ice. It’s a basic drink but one that has a great many fans.

Bloody Mary – A major staple of the brunch table. The Bloody Mary is made of vodka, tomato juice, and sometimes black pepper. Throw in a celery stem, and you’re good to go. It’s also one of the best hangover cures.

Screwdriver – Another simple drink to make, this one is made from vodka and orange juice. If you’re adventurous–try mixing it in with tang.

White Russian – Milk, Khaloua, and vodka. A tasty beverage that goes down easy, so be sure to limit yourself.

Vodka Martini – Shaken, not stirred. You’ll be pleased to know that this drink, which is a favorite of both James Bond and socialites, is easy to make. Ice, vodka, and vermouth, all you need is olive, and you’ve just made your first Martini.

No matter what day it is, Ed’s Tavern is the perfect location for food, fun, and a few cocktails. Our Happy Hour is every day and lasts from four to seven PM. For a menu, directions, and a lot more, visit us at edslakewoodranch.com.