So, you’ve been hearing about craft beers and would like to give them a try. With so many options, the enormous selection can be a lot less overwhelming with a guide for beginners. Ed’s Tavern lists terrific beers for novices to sample. 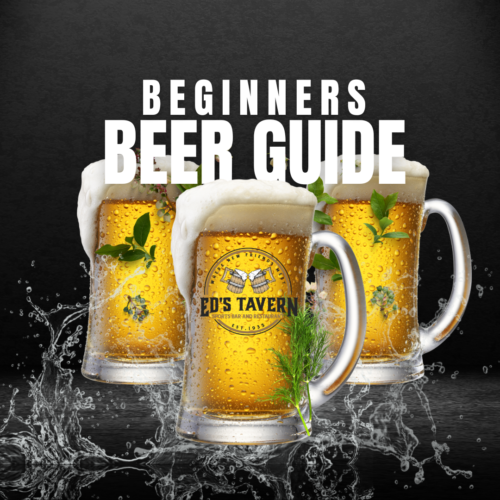 Coors Light beer is pure, easy to drink, and goes wonderfully with almost any occasion.

Corona Extra is a great beer for making a debut in the world of craft beers. Its smooth and flavorful taste boasts sweetness with a burst of citrus fragrance. By placing a wedge of lime into the bottle, the beer’s flavor is further boosted.

Bud Light Lime is a winner for beginners as a result of the classic bud light flavor of hops and malt. The zing of lime enhances the flavor of this awesome craft beer.

Shock Top beer is brewed with orange, lemon, lime peels, and a coriander spice blend, producing an impressively refreshing drink that offers sweetness with the faint essences of orange and hops.

Leinenkugel’s Summer Shandy is a Weiss beer, referring to Weissbier, which translates to “white beer” in German. Summer Shandy is infused with a refreshing natural lemonade flavor for a remarkable taste.

Killian’s Irish Red is an amber lager that is chock full of flavor without being overwhelming or pungent. It has a savory zest of both caramel and hops, accompanied by the taste of copper directly afterward.

Sierra Nevada Pale Ale craft beer starts with a prevalent citrus hop flavor that is counterbalanced with malts. The end result is a highly crisp beer that contains a delicate hop flavor and boasts a fine, alluring sweetness.

10 Barrel Raspberry Sour Crush belongs to the sour beer family that has become sought-after nowadays. This category of beer is attractive due to non-beer drinkers or beer drinkers that are partial to sour drinks. This sour beer is fantastic for people who desire something fresh and fruity, absent of a traditional beer taste.

LandShark beer is an island-inspired lager with an intricate combination of hops and two-row caramel malts. This mix furnishes an abundantly refreshing and silky flavor with a hint of caramel.

Guinness is a darker beer that is immensely suitable for people who are inexperienced with craft beers and want to go with a darker beer. Its comforting roasted flavor provides dabs of both chocolate and coffee for a satisfying taste.

Ed’s Tavern is a well-known sports bar that is second to none with its wide variety of cuisine and adult beverages. Our selection of beer is incredible in terms of variety and taste. Ed’s Tavern is located at 10719 Rodeo Drive in Lakewood Ranch, Florida and you may contact us by calling (941) 907-0400. We hope to see you at our popular establishment soon!